Disney+ Hotstar is a streaming service that shows popular movies and TV shows from all over the world. Subscribers can watch on two screens at once on their phones, computers, and some Smart TVs. We provide you with 6 Korean Drama on Disney+ below.

Korean drama are known for their clear sounds and images. The main reason why so many people watch Korean dramas is because they have interesting plots and make people feel the emotions in the drama. South Korean dramas do well because of a lot of different things. The main draw seems to be the storyline, the quality of the acting, the beautiful, trendy cinematography, and the fact that there aren’t too many episodes.

Now, we’ll show you 6 KDrama on Disney+ that we think would go well with your weekend rest.

Big Mouth is a drama, thriller, mystery, and law show with a South Korean theme. It stars Lee Jong Suk and Im Yoona. This drama is YoonA’s first legal noir drama. She also did a lot of work to get ready for the part. YoonA said that, in addition to talking to a lot of medical professionals, she also paid a lot of attention to the details of how she spoke and moved while acting. This is because he wants to show how confident Mi-ho is. In the drama, Yoona plays Mi-ho.

Lee Jong Suk was in the news because the drama Big Mouth was his first job after he got out of the military in January of last year. He played a lawyer who was bad at his job and never won in court. Who has seen this show? 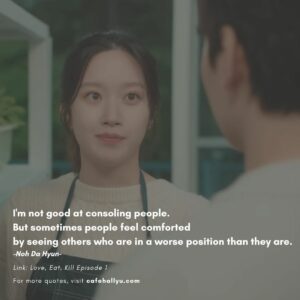 Link: Love, Eat, Kill is a mystery, romance, fantasy, and drama. Yeo Jin Goo and Moon Ga Young are in the drama. Yoo Jin Goo plays the role of Eun Gye Hoon, a young man who has to work with a lot of people but has to keep his distance from them because he has a lot of hurt in his heart. And this drama shows how hard it was for Eun Gye Hoon to become a Professional Chef.

Noh Da Hyun, the character that Moon Ga Young plays, is a hardworking woman who has been through a lot in her life. Many hard efforts made by Da Hyun ended in vain, but never made Da Hyun give up. This side makes Moon Ga Young feel sorry for Noh Da Hyun and also gets ideas from him. Doctor Lawyer is a drama with a thriller, law, medical, and drama theme. So Ji Sub and Im Soo Hyang are in the drama. Doctor Lawyer was So Ji Sub’s first new TV show in four years. So Ji Sub plays the role of Han Yi Hyan, a young surgeon who did well for himself, was played by this actor.

“Doctor Lawyer” is about a skilled surgeon named Han Yi-han who can’t save the life of a patient after an operation goes wrong. The story goes on as he becomes a lawyer who specializes in medical law and finds out why his operation didn’t work.

He stated during the dramatic press conference that “A doctor is a person who saves a patient’s life. And to a certain extent, a lawyer also saves a person. Yi Han is a fascinating guy, in my opinion, because of this singular quality of straddling two professions.

Im Soo Hyang portrays prosecutor Geum Seok Young in the drama. She firmly believes that punishment, not kindness, should be used to rehabilitate criminals. She also wants to stand up for innocent defendants. Bloody Heart is a drama with historical, romance, drama, political themes. Starring Lee Joon, Jang Hyuk and Kang Han Na. Lee Joon plays the role of Lee Tae, a king who has to abandon the woman he loves to survive, and Yoo Jung (Kang Han Na), a woman who has to become the queen to survive.

Lee Joon said, “I chose ‘Bloody Heart’ at the thought of gaining fresh experiences by participating in a drama with very convincing characters. I especially had the desire to challenge myself to overcome my baseless fear regarding the sageuk (historical drama) genre.”

Kang Han Na play the role of Yoo Jung. Her first impression of Yoo Jung is someone who emanates “power and versatility,” which makes her more attractive. This is Kang Han Na’s first-period drama in six years after the smash hit K-drama “Moon Lovers: Scarlet Heart Ryeo”.

Crazy Love is a drama with comedy, romance, drama theme. Starring Krystal Jung and Kim Jae Wook in the drama. The story about an  unexpected romance between an employee and her boss. Kim Jae Wook plays the role of Noh Go Jin and Krystal plays the role of Lee Shin Ah. Go-Jin has a very sensitive personality and he’s abrasive and snappy towards, not only Shin-a, his current secretary, but to his previous secretaries who were also in the show.

Krystal plays Lee Shin A as a secretary, who works for CEO Noh Go Jin. The plot of this drama is about a CEO who is mean to people but has to deal with death threats. He has a secretary who is very sick and has to act like he is engaged to her.

Have you watch the drama? You can check the synopsis bellow! After the first episode aired, Snowdrop faced criticism for historical inaccuracy. For being a historical outlier, Snowdrop received criticism. A petition to halt the broadcast received more than 300,000 signatures from Korean internet users.

Ultimately, JTBC carried on airing the drama Snowdrop. The television stated that the setting of this drama was the military regime and that it featured a made-up tale about the ruling party working together with the North Korean government to keep power.

Have you watch this drama?

Which of the six shows above have you watched?

Written by: sparkling @ cafehallyu
PLEASE TAKE OUT WITH FULL CREDITS!

CafeHallyu is supported by advertising and affiliate links (we’ll make money from links you buy at no extra cost to you) which help keep the lights on. If you like what you see, please whitelist us from your adblocking software so that we can keep doing what we do.
Recommendation Vincent by Sohyang (Why Her? OST) English Lyrics

Remember Me by Davichi (Our Blues OST) English Lyrics