In Drama Red Balloon Seo Ji Hye, Lee Sang Woo and Hong Soo Hyun star. From December 17, 2022 – February 19, 2023, every Saturday and Sunday at 21:00 on TV Chosun. Red Balloon brings a story about four people who are trying to satisfy their needs and heal their broken hearts. Here We provide Quotes Drama Red Balloon with cast and synopsis.

A story about four people who are trying to satisfy their needs and heal their broken hearts.

Jo Eun-Gang (Seo Ji-Hye) wants to be a teacher, but she failed her test to become a teacher. She is now a private teacher who seems calm, but her heart is full of something very hot. She is the kind of person who will do whatever it takes to get what she wants.

Han Ba-Da, played by Hong Soo-Hyun, is married. She makes jewelry for a living. Her parents lost all of their money right before her wedding. She was about to cancel her wedding, but her fiance talked her into going through with it. Because of her mother-in-law, her life is hard.

Lee Sang-Woo plays Go Cha-Won, who is a dermatologist. As his parents had hoped, he became a doctor and is now married to Han Ba-Da. He hates his job and knows that his mother is making things hard for his wife, but he doesn’t know what to do. 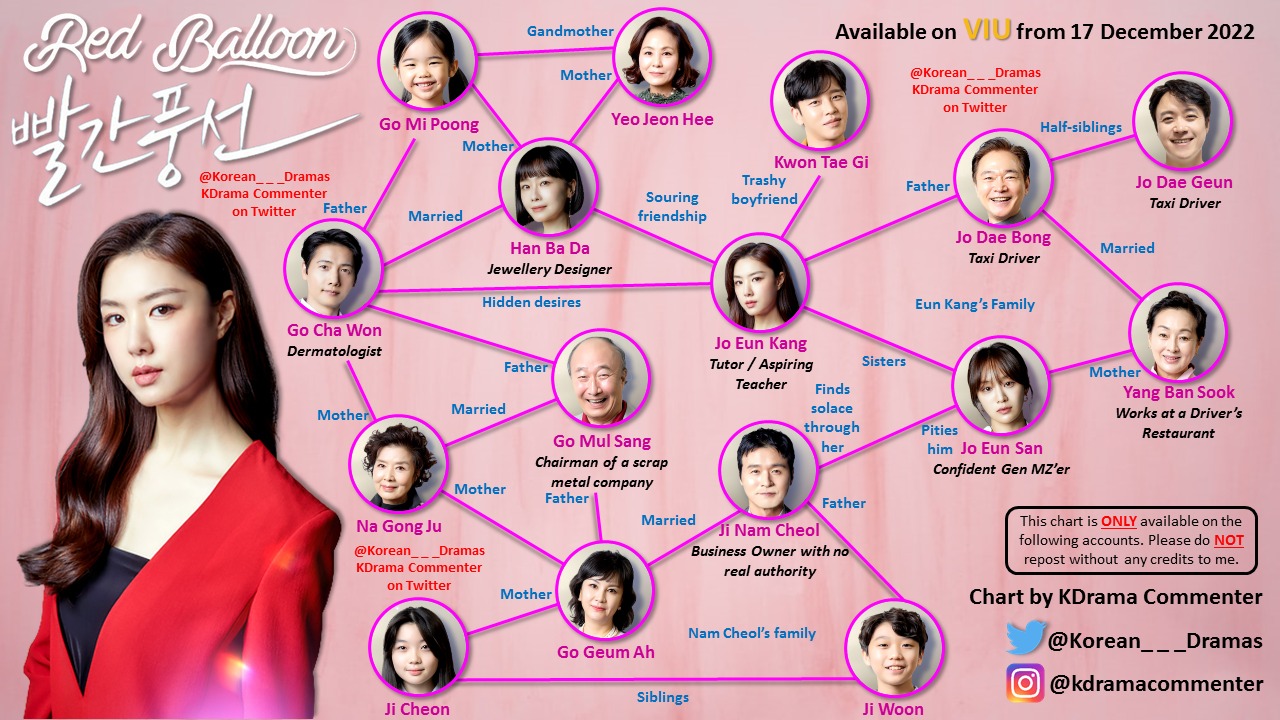 Every woman endured it to date.
That’s how different we are when it comes to beauty.
-Go Cha Won-

It’s not like I’m a homemaker.
Also, this is our home, and you’re our guest.
It’s unfair for you to meddle and get angry over the way we live.
-Han Ba Da-

For me, earning money and raising our child is far easier than being a daughter-in-law.
-Han Ba Da-

No one lives with the man’s parents these days.
The trend is to live with the woman’s parents.
-Jo Eun Kang’s Mom-

There’s no one I can talk to at home.
No one understands me. I’m so lonely.
-Go Mul Sang-

Moving out of your parents’ house is the best for married couples.
-Go Geum A-

Having a husband who’s good to you is better than having a kind mother-in-law or sister-in-law.
-Go Geum A-

It takes two to get married.
You can’t push forward on your own.
-Jo Eun San-

There’s only one thing you must consider before marrying.
Your mother-in-law.
-Han Ba Da-

There are many others who are better than I am.
Those who can embrace you.
Don’t waste your breath on me.
-Kwon Tae Gi-

Jo Eun Kang:
I can’t let the past four years of my life go to waste.
It was an investment on my part.
My youth, my time, my money, my effort, and my mind and body.
They weren’t for free.
Kwon Tae Gi:
I’ll pay you back, then. How much do you want?
Jo Eun Kang:
Pay me back as my husband.

Don’t go peeping at those people.
Even if you run around naked,
you wouldn’t be able to catch up to your friend.
You’re nothing but her minion.
-Kwon Tae Gi- Drama The Interest of Love Quotes, Cast, and Synopsis Episode 1-2

Child by Elaine (Under The Queen’s Umbrella OST) English Lyrics

Drama Under The Queen’s Umbrella Quotes, Cast, and Synopsis Episode 1-2