In Drama Reborn Rich Song Joong Ki, Shin Hyun Bin, and Lee Sung Min star. From November 18, 2022, on JTBC. Reborn Rich brings the story of how dirty the power struggle is within the Korean company, Soonyang Group. This drama with Business, Drama, and Fantasy, themes are adapted from a popular webtoon “Youngest Son of a Conglomerate”. Here We provide Quotes Drama Reborn Rich with cast and synopsis.

Yoon Hyun-Woo (Song Joong Ki) has worked for Soonyang Conglomerate for more than ten years. Most of his job is to take care of the family who runs the business. His job is similar to a servant’s, but the conglomerate family wrongly thinks he stole money from them. Then, their youngest son Jin Do-Joon kills him. The next thing he knows, Yoon Hyun-Woo is in the body of Jin Do-Joon, the family’s youngest son. He decides to get back at the family that runs Soonyang Conglomerate and also runs the business. 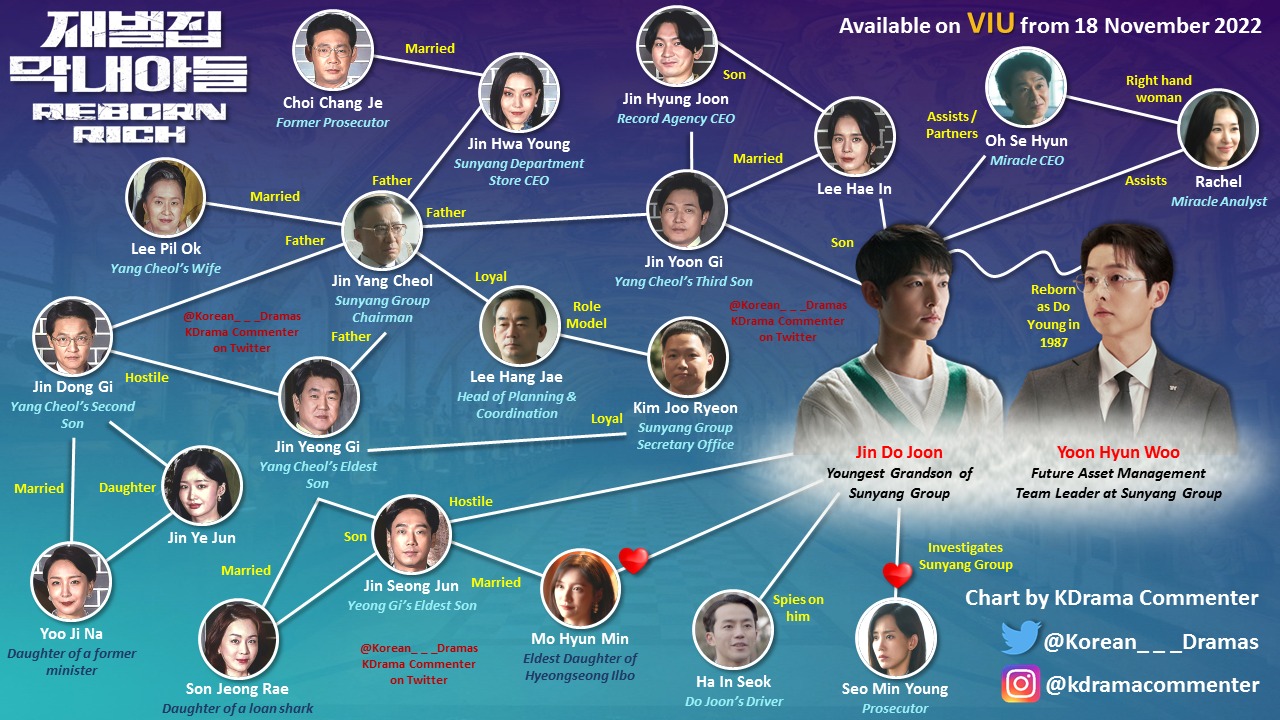 I never forgave those who went against me.
Even if that person shares my blood and is a sibling or an offspring.
-Jin Yang Cheol-

People born into money who never experienced failure once,
and therefore can never even imagine that they could be wrong.
-Oh Se Hyun-

If a businessman put his parents and siblings before his profits,
he’d never make money.
-Jin Yang Cheol-

We can’t afford flowers.
We need every dollar we can find.
-Yoon Hyun Woo’s Mom-

So what did I do so wrong…
to be this idiot who can’t even buy flowers…
for my wife who had a tough life,
running a restaurant and raising our kid?
-Yoon Hyun Woo’s Father-

He acts smart, but he’s foolish.
He plays the money game but knows nothing about business.
-Jin Yang Cheol-

When you bring up a servant,
you mustn’t give him great housing and a full stomach.
Do you know why?
Because he’ll begin to think he’s the master.
-Jin Yang Cheol-

A family that’s blessed with money is different.
-CEO Mo-

Well, if the two great young people end up tying the knot,
I wouldn’t want anything more as a parent.
-CEO Mo-

The wish that was much bigger and desperate than wanting Soonyang.
That’s the reason I can’t back out of this futile fight.
-Jin Do Joon-

When you offer a deal, it means there’s a condition.
-Jin Yang Cheol-

You’ll never live as a member of the ordinary public.
You are my grandson.
-Jin Yang Cheol-

Make lots of money so that you don’t have to feel sorry for your kids.
Make lots so you can spoil your kids.
-Han Kyung Hee-

If the President wields a sword,
you lie low and feign death while other heads roll.
That’s how you stay alive, isn’t it?
-Jin Yang Cheol-

You’ll never live as a member of the ordinary public.
You are my grandson.
-Jin Yang Cheol-

If you want to get him kicked out jobless,
take this chance to remove his position as my son-in-law and start anew.
And see if anyone approaches him.
-Jin Yang Cheol-

Jin Yoon Ki:
Nowadays, money is power.
Jin Do Joon:
In the end, what moves money is authority.

A devoted husband, model father, successful businessman.
I thought that was the kind of married life you wanted.
What more do you need? Tell me.
-Jin Sung Jun-

Do you know why you must be careful when you spend someone else’s money?
The money I gave them isn’t the reason they must listen to me.
They have no choice but to do as I say…
because I have leverage over them since they received money from me.
-Jin Yang Cheol-